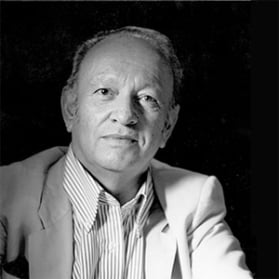 A Disused Shed in Co. Wexford

Let them not forget us, the weak souls among the asphodels.
— Seferis, Mythistorema

Even now there are places where a thought might grow —
Peruvian mines, worked out and abandoned
To a slow clock of condensation,
An echo trapped for ever, and a ﬂutter
Of wildﬂowers in the lift-shaft,
Indian compounds where the wind dances
And a door bangs with diminished conﬁdence,
Lime crevices behind rippling rain barrels,
Dog corners for bone burials;
And in a disused shed in Co. Wexford,

Deep in the grounds of a burnt-out hotel,
Among the bathtubs and the washbasins
A thousand mushrooms crowd to a keyhole.
This is the one star in their ﬁrmament
Or frames a star within a star.
What should they do there but desire?
So many days beyond the rhododendrons
With the world waltzing in its bowl of cloud,
They have learnt patience and silence
Listening to the rooks querulous in the high wood.

They have been waiting for us in a foetor
Of vegetable sweat since civil war days,
Since the gravel-crunching, interminable departure
Of the expropriated mycologist.
He never came back, and light since then
Is a keyhole rusting gently after rain.
Spiders have spun, ﬂies dusted to mildew
And once a day, perhaps, they have heard something —
A trickle of masonry, a shout from the blue
Or a lorry changing gear at the end of the lane.

There have been deaths, the pale ﬂesh ﬂaking
Into the earth that nourished it;
And nightmares, born of these and the grim
Dominion of stale air and rank moisture.
Those nearest the door grow strong —
‘Elbow room! Elbow room!’
The rest, dim in a twilight of crumbling
Utensils and broken pitchers, groaning
For their deliverance, have been so long
Expectant that there is left only the posture.

A half century, without visitors, in the dark —
Poor preparation for the cracking lock
And creak of hinges; magi, moonmen,
Powdery prisoners of the old regime,
Web-throated, stalked like trifﬁds, racked by drought
And insomnia, only the ghost of a scream
At the ﬂash-bulb ﬁring-squad we wake them with
Shows there is life yet in their feverish forms.
Grown beyond nature now, soft food for worms,
They lift frail heads in gravity and good faith.

They are begging us, you see, in their wordless way,
To do something, to speak on their behalf
Or at least not to close the door again.
Lost people of Treblinka and Pompeii!
‘Save us, save us,’ they seem to say,
‘Let the god not abandon us
Who have come so far in darkness and in pain.
We too had our lives to live.
You with your light meter and relaxed itinerary,
Let not our naive labours have been in vain!’

The title suggests something familiar, ordinary, almost local, but this is a poem that opens up to place and history and invites the reader to consider the plight of people who have known suffering, injustice, abandonment, catastrophe over many centuries. The places mentioned - an abandoned mine in Peru, an empty compound in India, a concentration camp in Treblinka, the Roman city Pompeii, and a disused shed in the grounds of a burnt-out hotel in County Wexford from civil war days - present the reader with a powerful global perspective.

Mahon’s opening line – ‘Even now there are places where a thought might grow’ - is not only quietly hopeful but it invites us to engage with important themes and, in doing so, insight and understanding might be reached. In the very act of reading the poem, thoughts grow.

The six stanzas contain many atmospheric details and sensuous images. For example, though the abandoned Peruvian mine is an empty, lonely image, Mahon’s description of ‘An echo trapped for ever, and a flutter/ Of wild flowers in the lift-shaft’ brings alive in the reader’s mind a beautiful, haunting picture. Or the glorious, celebratory line ‘With the world waltzing in its bowl of cloud’.

One of the most striking and memorable images in the poem is that of a thousand mushrooms, in dark isolation, crowding towards a keyhole. It conveys both a sense of a crowd and the ache of longing. It becomes an image of a people lost and desperate.

The shed, containing the mushrooms, has been interpreted as a symbol of the Six Counties, formed after the 1921 Treaty, and an abandoned Northern Protestant community, but to read the poem in terms of that one interpretation would be too limiting and does not do the poem justice. That said, writing in 1992 Seamus Deane said that the poem [first published in The Listener, 1973] ‘heartbreakingly dwells on and gives voice to all those peoples and civilisations that have been lost and/or destroyed. Since it is set in Ireland, with all the characteristic features of an Irish “Big House” ruin, it speaks with a special sharpness to the present moment and the fear, rampant in Northern Ireland, of communities that fear they too might perish and be lost with none to speak for them.’

But the wide panorama and wide frame of reference mean that the poem looks beyond any particular place or people; it is a meditation on global oppression, injustice, violence, sorrow.

Derek Mahon, an only child, says [in his poem ‘Courtyards in Delft’] that he was a ‘strange child with a taste for verse’. Born in Belfast on 23 November 1941, Mahon remembers from childhood ‘a 1940s radio set, a Japanese lacquered cigarette case, an aunt’s white shoes’ which he called ‘the little things that you saw with a child’s eye when you were a child and that will never go away’.

His grandfather and father worked in the Harland and Wolff shipyard and the house he grew up in was ‘a quiet house’. Being an only child ‘I had time for the eye to dwell on things, for the brain to dream about things. I could spend an afternoon happily staring.’ His background was Protestant but his parents ‘weren’t really serious church people . . . . It was all appearances. I tagged along, scrubbed and kempt.’

After Skegonell Primary School and the Royal Belfast Academical Institution, which he didn’t like – ‘I started moping, brooding; I didn’t go in for sport’ - Mahon went to Trinity College where he studied Modern Languages: ‘Beautiful college, beautiful trees, beautiful girls . . . golden days, golden moments’. After Trinity, in 1965, Mahon went to Canada and the US, returning to teach in Belfast two years later.

The Troubles in the late 1960s unsettled him: ‘I felt very far from home in those years. (In fact, for a large part of my life I’ve been terrified of home.) . . . I couldn’t deal with it. I could only develop a kind of contempt for what I felt was barbarism, on both sides.’ In 1968 he published his first collection, Night-Crossing.

Mahon left Belfast after a year, moved to Dublin then left for London. He married Doreen Douglas in 1972 and Lives, his second collection, was published that same year. They had two children. The Snow Party, containing ‘A Disused Shed in Co. Wexford’ appeared in 1975 and Mahon was appointed poet-in-residence at the New University of Ulster [1977-1979] after which he resolved ‘never to live in Northern Ireland again’

He moved to London for fifteen years, where he worked as a freelance journalist and held several residencies and spent the early 1990s in New York. During this time he published several more collections and his marriage ended. A Collected Poems was published in 1999. Derek Mahon now lives in Kinsale, Co. Cork, his favourite Irish county.

Refusing an OBE and the Queen’s Gold Medal for Poetry, Derek Mahon never sought publicity. In TheYellow Book [1999] he casts a cold eye on our consumerist, image-obsessed world:

Everywhere aspires to the condition of pop music,
the white noise of late-century consumerism—

and writes of how our lives are coloured by:

Derek Mahon is more interested in his poetry than in his reputation and what interests Mahon is a poetry ‘written by solitaires in the cold, written by solitaires in the open, which is where the human soul really is’. Declan Kiberd described Derek Mahon as ‘the most underrated Irish poet of the twentieth century’. A New Collected Poems appeared in 2011.